In this article, we focus on our general webhooks.
If you want to learn about our App-Specific Webhooks, which can be created only by Marketplace apps, then you can do it here.

Webhooks allow you to get programmatic notifications from Pipedrive about changes to your data as they happen. If you're new to webhooks, read this guide to learn more.

Rather than requiring you to pull information via our API, webhooks will push information to your endpoint. When one of those events is triggered (for example a new deal is added), Pipedrive will send this notification as an HTTP POST request, with a JSON body, to the endpoint(s) you specify.

You can create a new webhook in the Pipedrive web app via Settings > Tools and apps > (Tools) > Webhooks. The maximum limit of webhooks is 40 different webhooks per user.

The user will be disabled in the Permission level's dropdown list if one has exceeded the max limit of webhooks.

Here's what the Create new webhook form looks like for the Admin user because the Permission level drop-down menu is unavailable to Regular users: 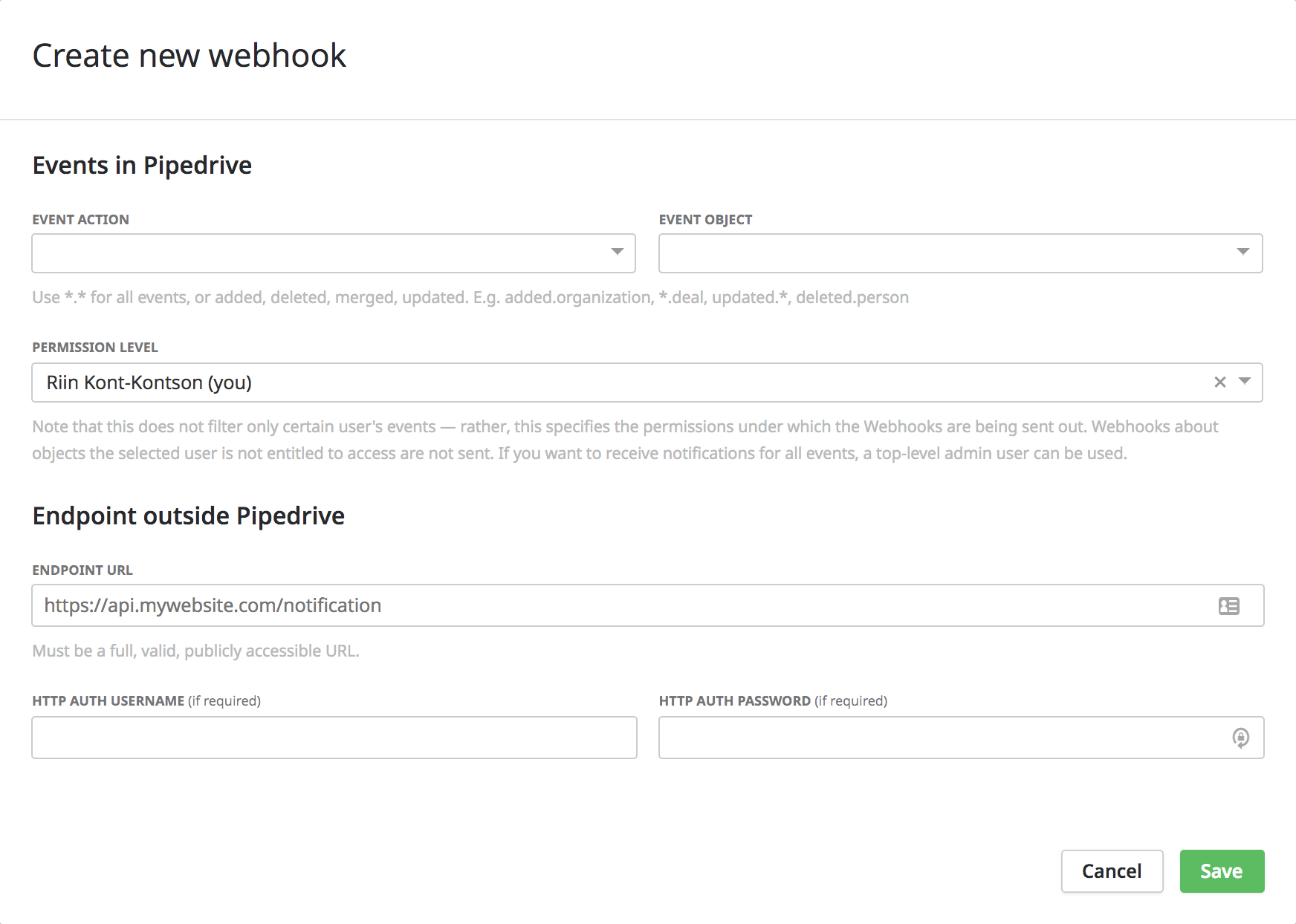 Now let us explain the parameters for events both in and outside of Pipedrive:

With an event, you can filter what kind of events you want to receive (few example events below).

Events in Pipedrive are triggered both from the Pipedrive UI and from the API calls.

For testing and sandboxing purposes, you could use RequestBin, Webhook Tester or ngrok.

NB: For changes specific to the user object, the change object should be accessed as current[0] and previous[0].

See the explanations for the webhook meta block's parameters here.

For a successful delivery, we'll accept any 2XX status code.
Anything other is counted as a failure and the retry policy will commence.

You can determine the number of delivery attempts according to the value of the retry field in the payload (see the format above). Learn about the retry logic below.

In the current and previous blocks, the standard data of each object is placed in a way which conforms to our API Reference with the following rules:

View list of webhooks to see all available combinations of event objects and event actions for creating webhooks.

You can see all possible webhooks that can be created in Pipedrive here.

You can see the status of the last attempt made by your webhook(s) in the webhook dashboard. The webhooks dashboard is available under Tools and integrations > Webhooks inside Pipedrive.

There are three status code ranges or messages that are expected:

For a successful delivery, we'll accept any 2XX status code. Any other code or message is counted as a failure, which means the retry logic, as well as the webhooks policy, will commence.

Outgoing webhooks are not subject to our API rate limit.

The webhooks policy is applied to both general and App-Specific webhooks.

Pipedrive has a Ban System for webhooks, which means that every time the original notification sending attempt fails on the first try (due to receiving a non-2xx response code or exceeding a timeout of 10 seconds) the ban counter will increase by one.

Do take note that:

If there are no successful deliveries to a webhook on 3 consecutive days, we will delete it.